How to Pack for a Motorcycle Trip 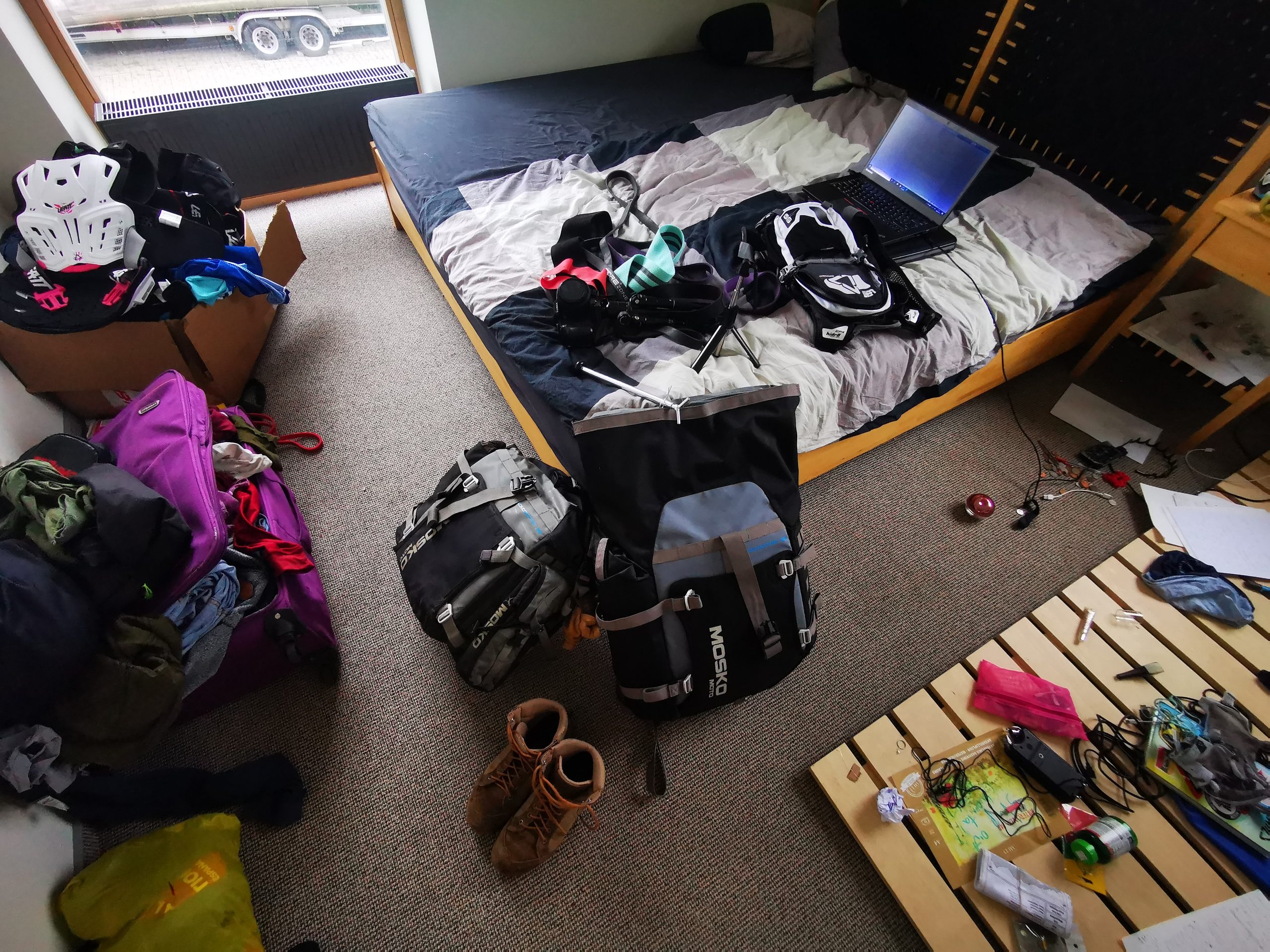 Really, dude? Really? “How to pack for a motorcycle trip”? As someone who dislikes talking about stuff, I’m just as surprised about my sudden onset of wanting to discuss luggage and things as you are. I mean, it’s not like there’s a shortage of posts, articles, and videos about packing your bike for a long-distance trip. The thing is, though, despite all that information out there, as well as your own unbridled creativity, how often have you found yourself obsessing over packing lists, attempting to reduce volume and weight, and packing and re-packing several times before you give up and just cram everything down your panniers, wipe the sweat off your brow, cuss profusely, and go?

In this Yet Another Motorcycle Packing Post, I’m going to reveal my most prized secret of the “30-Minute Panic Pack”, which helps people like you and me go from chaos 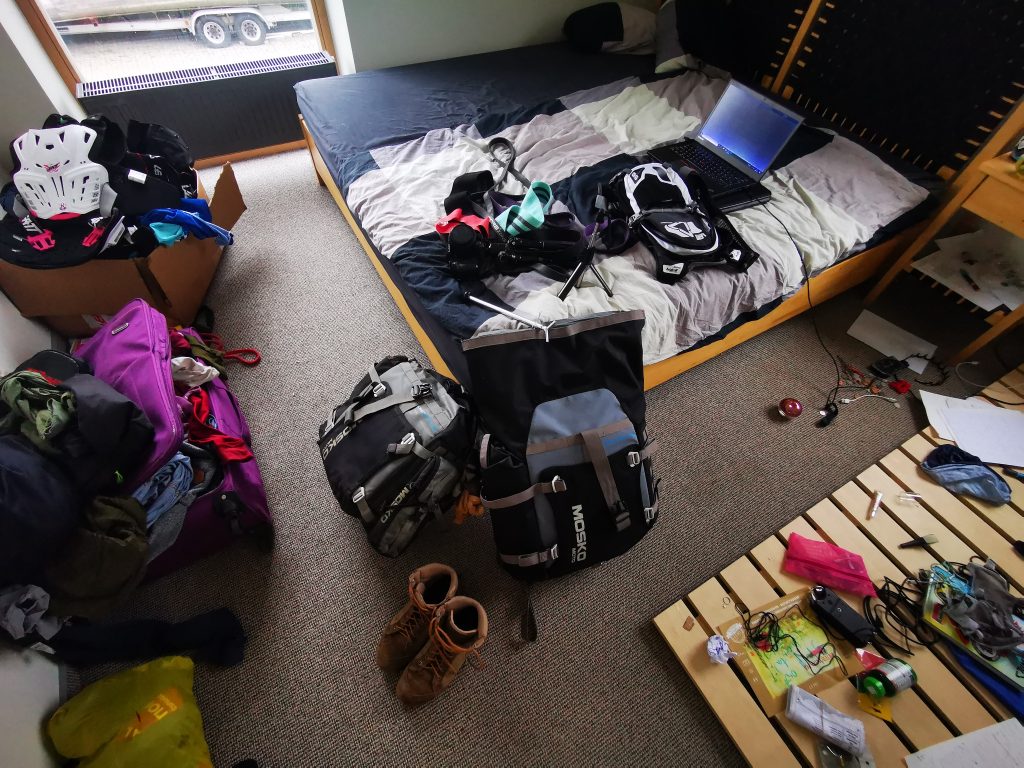 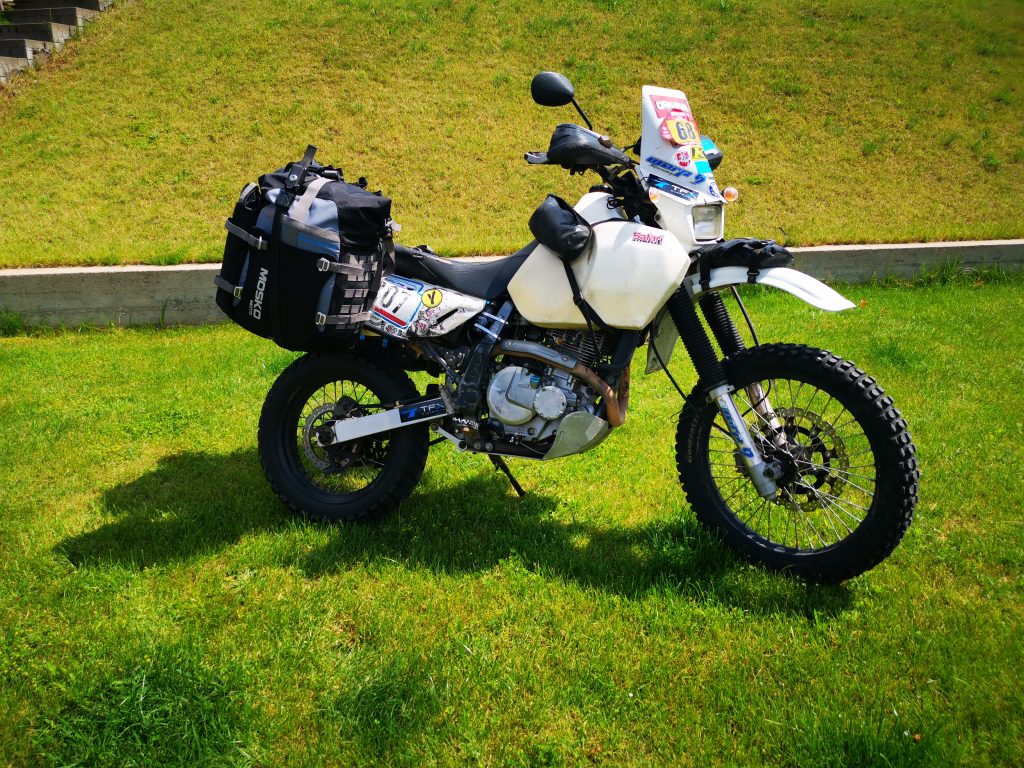 In thirty minutes or less.

What to Pack for a Motorcycle Trip

Short answer? Whatever you want.

Keep in mind two things, however: one, the set up you leave home with is not going to be the same set up you come back with. As you go along, you’ll throw some stuff away, buy new stuff, reduce stuff, change stuff – it’s all part of the process. And two: we all overpack the first time. Then, we go to another extreme shaving plastic off our toothbrush handles to save a few grams of weight and trying to be radically minimalist; and finally, after many trials, tribulations, and broken dreams in the form of split luggage seams, we find our own equilibrium. What that equilibrium will look like for you is up to you, my hard-rockin’ amigo.

My equilibrium is simple: I pack my electronics (laptop, a DSLR, a mic, a tangle of chargers and cables) and notebook (journo, can’t help myself), some clothes, a pair of hiking boots, a bag of toiletries, a very basic first aid kit, and my motocross gear (rally racing, man).

Instead of the motocross gear, I used to carry my tent, sleeping bag, and sleeping pad, but ever since I started racing and became plagued by delusions of rally grandeur, I had to sacrifice my camping gear for knee braces. How very unadventurous of me – but I sleep better now, so there’s that.

And that is it.

If you need more stuff, though, that’s totally cool. If you carry less, bravissimo – but as I said, to each their own, and let’s just keep on rolling under the big skies.

What Not to Pack for a Motorcycle Journey

If you’re packing for a motorcycle trip that will take more than 6 months and span several countries or continents, you’re probably freaking out thinking “but man, What If!!!!”. I get it. What if you get a flat tire, what if you run out of socks, what if there’s no toothpaste in Kyrgyzstan, what if it rains so bad my GoreTex ain’t going to cut it, what if, when I pitch my tent, I don’t notice this big sharp tree root and when I go to sleep it digs into my back and it’s real uncomfortable and the sleeping pad itself isn’t enough, and I should have packed and extra one…

And on and on it goes, and I understand that, but here’s the thing: unless you are going to the Far EAast and Chukotka, kayaking down the Amazon River, or venturing off into the Northern Territories on your lonesome, you are not going to get that remote. The world is a pretty developed place, and even if you mostly ride off-road, you often won’t be more than 300 kilometers from the nearest town, and the nearest town will have a shop and an ATM and a mechanic and a paved road which will lead to a bigger city which will have supermarkets, shopping malls, banks, Starbucks, a BMW dealership, a vegan burger diner, a DHL office, and magnificently fast WiFi… See where I’m going with this? On the road, you might have several days here and there where you are out in the sticks, sure, but it will not be all the time. You will be able to find toothpaste in Kyrgyzstan, Mexico has Walmart, Colombia loves KTM dealerships, and there are more Starbucks places in Arequipa, Peru than in Gloucester, UK.

All sorts of things will happen to you on your journey, but you will be able to figure them out, and if you haven’t packed enough shirts or charger cables, just buy them on the road.

Alrigthy, now we’re getting closer to the “30-Minute Panic Pack Trick”. Before I reveal my precious packing secrets, however, I just wanted to touch briefly on the luggage set up that I use. Just like with what you pack, how you pack is also entirely and blissfully up to you. Aluminum panniers, soft bags, top boxes, saddlebags, no bags at all – you do you, my road-trippin’ compadre.

Me, I do Mosko Moto. 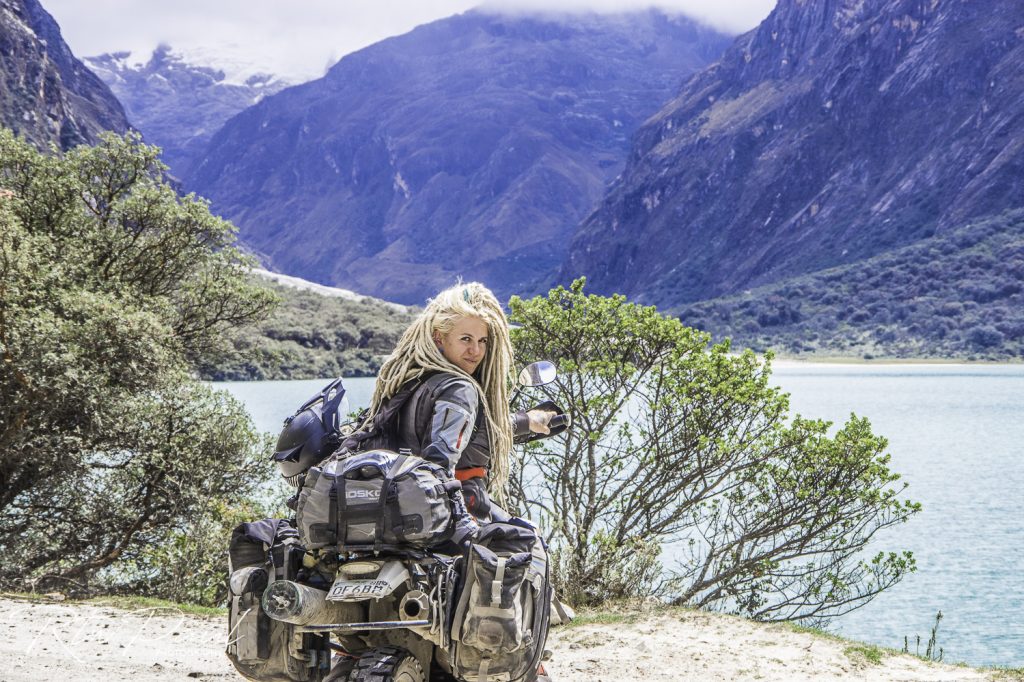 Luggage isn’t exactly the most exciting topic on this green Earth, so I don’t want to spend much of my time thinking about it. I just want it to function, and that is what my Mosko Moto Backcountry panniers (35 liters each) and Scout duffel (25 liters) do perfectly. Mosko Moto stuff is waterproof, incredibly durable, and virtually indestructible (yes, I have crashed with the luggage on, yes, multiple times, yes, both on and off the road, and yup, at high and slow speed). They’re also amazingly easy to put on the bike and take off (literally just a few seconds), they’re light, and they are lockable – I used two tiny padlocks for the main clips and steel wire cords around them for extra security.

I’ve been traveling with my Mosko Moto luggage for over three years now, and I’m a huge, huge fan. But that’s just me – if you feel hard metal cases or a backpack strapped to the back of the bike is what makes it work for you, do that. 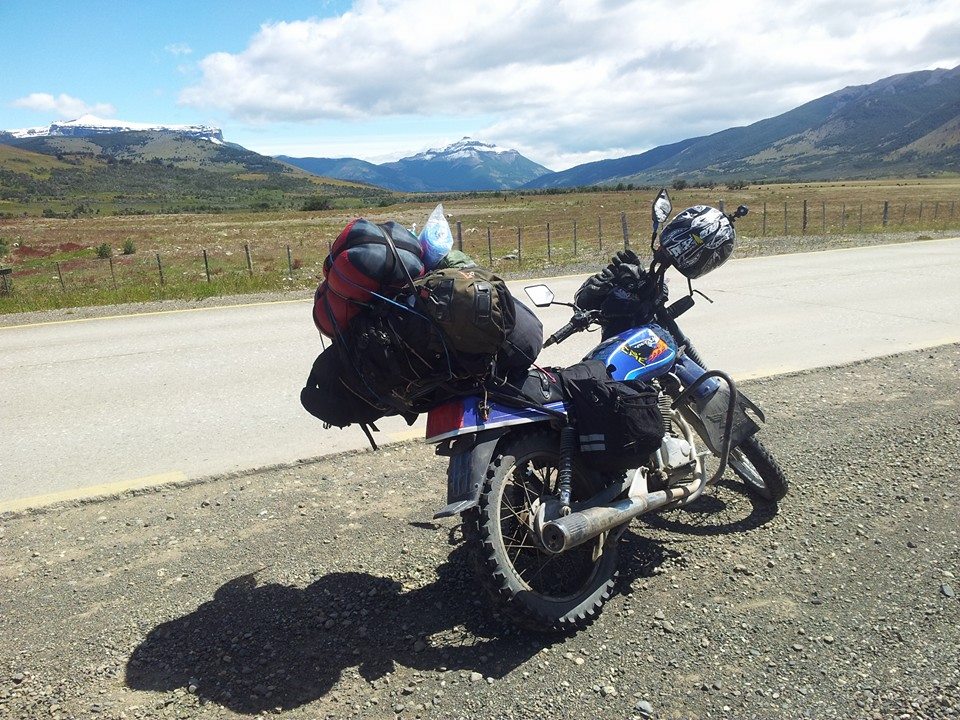 Looks like I made you read all of that before revealing the Thirty Minute Panic Pack (muahahahahaa, she laughs with an evil eye twitch), whoopsies! Alright, let’s get right into it. Here is the magical system that will rein chaos in and restore law and order in your panniers:

Your Luggage Is Your Home…

If you’re going on a long ride, you’ll be living off your bike, so why not treat it as su casa? For me, this makes packing easier, too. I have my Living Room Pannier which houses my hiking boots, clothes, a small bottle of perfume, a book, and a small bag with miscellaneous stuff like extra SD cards, that ring I bought in Cuba and forgot about, some expired paracetamol, an old roadbook roll, a few scrunchies, and some vape juice – you know, stuff you would have in an actual living room. Then, my Bedroom Pannier used to house my camping gear but is now storing my MX gear for racing, plus a spare tire tube and clutch plates in the molly bag. Finally, my duffel is my Office – I carry my laptop and other electronics in it.

When you look at your luggage like this, it’s much easier to panic pack, because you now have three categories and three corresponding pieces of luggage (it can be two, five, or thirteen for you – sky’s the limit!).

…So Tidy the Hell Up

Here’s a confession that’s going to surprise no one at all: I’m a messy person. I do not subscribe to the insidious cult of made beds, same-color socks, folding, or putting things away in drawers – floor is good enough. However, when it comes to packing for a round-the-world ride, you gotta keep things organized or you shall perish in the never-ending process of stuffing, cramming, rummaging, and ransacking your panniers over and over and over again. To avoid unsightly situations like trying to fish out your mosquito repellent from the bottom of your panniers and spilling your underwear, cans of tuna, and a ball of mouldy rain gear you’d totally forgotten to dry out on the ground, get yourself a bunch of packing cubes. 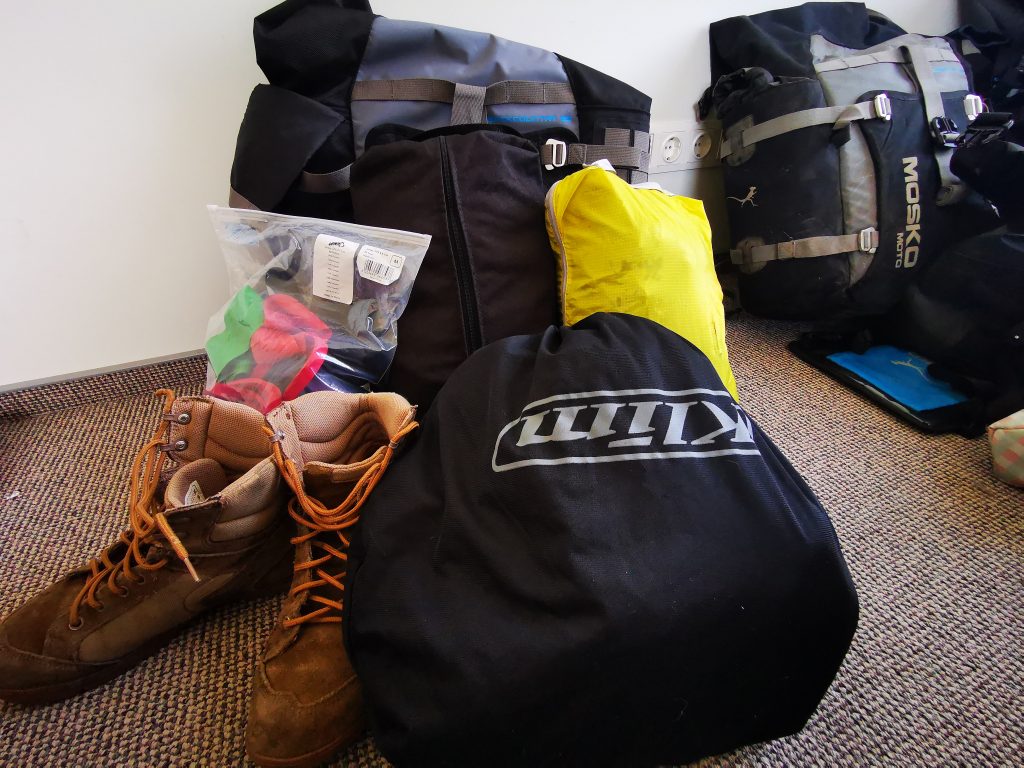 If your soul is too free for something as mundane as packing cubes, and you detest having to organize things, I feel you, my poetry-loving brother or sister. But trust me on this: if I can do it, so can you, and once you have a system in place, you’ll be thanking yourself over and over and over again, which, if I may add, is a very wonderful feeling. Treat yourself to a cup of hot chocolate for being good.

So: get a bunch of packing cubes, organize everything into said cubes, then put cubes into bigger cubes, that is, your luggage. If you don’t want to buy packing cubes, do what I do and use old gear bags, zip loc bags, and so on – whatever is handy is inherently good and just (although I am so, so tempted to insert an Amazon affiliate link to a fancy packing cube set just about here!).

And just like that, you’re all packed! Make a decision about what to bring, remember that you can always buy stuff on the road, treat your luggage like you would rooms in your home, stuff everything into packing cubes, and you’re golden, my free-roaming, GS-taming, GPS-wielding comrade of the two-wheeled cult.