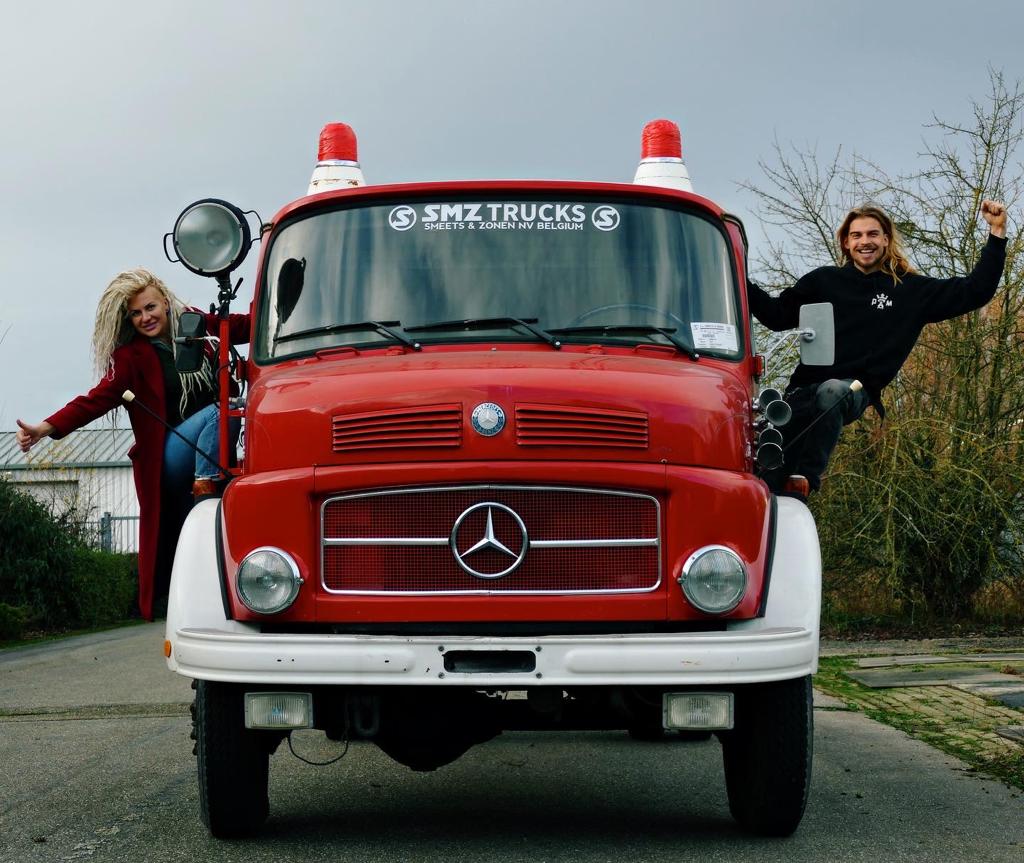 The overland truck build is now in full swing, and it’s hard to believe the whole thing was a mere idea just a few months ago. Moored in the cold and overcast wilderness that is Northern Holland, we’re currently working on the Mastodon – our 1971 Mercedes LAF 1113B firetruck – and trying to figure out the ins and outs of the whole insane process. Don’t worry, we’re not actually naming it Mastodon – it’s just that driving the truck feels like wielding some massive, ancient, but vaguely benevolent beast. The first time I drove it, I nearly took out a lamppost and a neighbor’s storage unit before promptly getting the clutch pedal stuck (luckily, Lennart resolved this with clever use of a sledgehammer). When that engine starts rumbling and the truck jolts forward, it’s like sitting high atop the world on the back of a giant woolly mammoth that moves forward with so much power you pretty much trust it’s got your back. 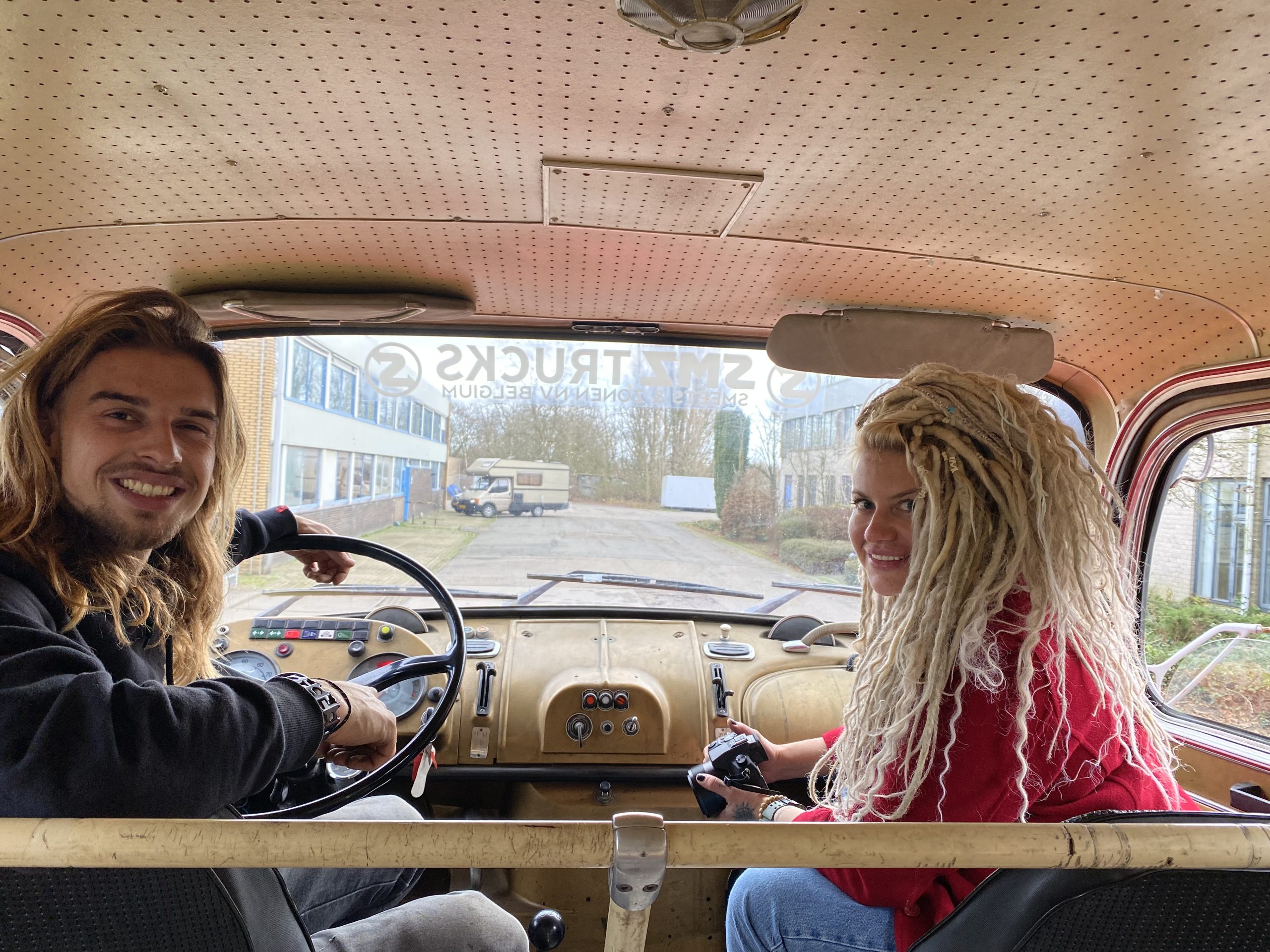 Still, we’ll need to name the Mastodon properly soon – if you’ve got any cool name suggestions, post them in the comments below!

Names and ancient beasts aside, the overland truck build has officially begun. We already talked about why we’re building the expedition rig in the first place, and now, it’s getting all too real.

First off, we picked up our truck in Belgium, where it sat indoors for quite a while. The fact that it was a firetruck explains its fairly pristine condition: the rig has 60,000km on the engine with 5000 running hours. The engine itself is an OM352, a 6-liter Turbo Diesel engine with 160 horsepower. Not too shabby for a four-wheeled elephant that’s older than either of us. 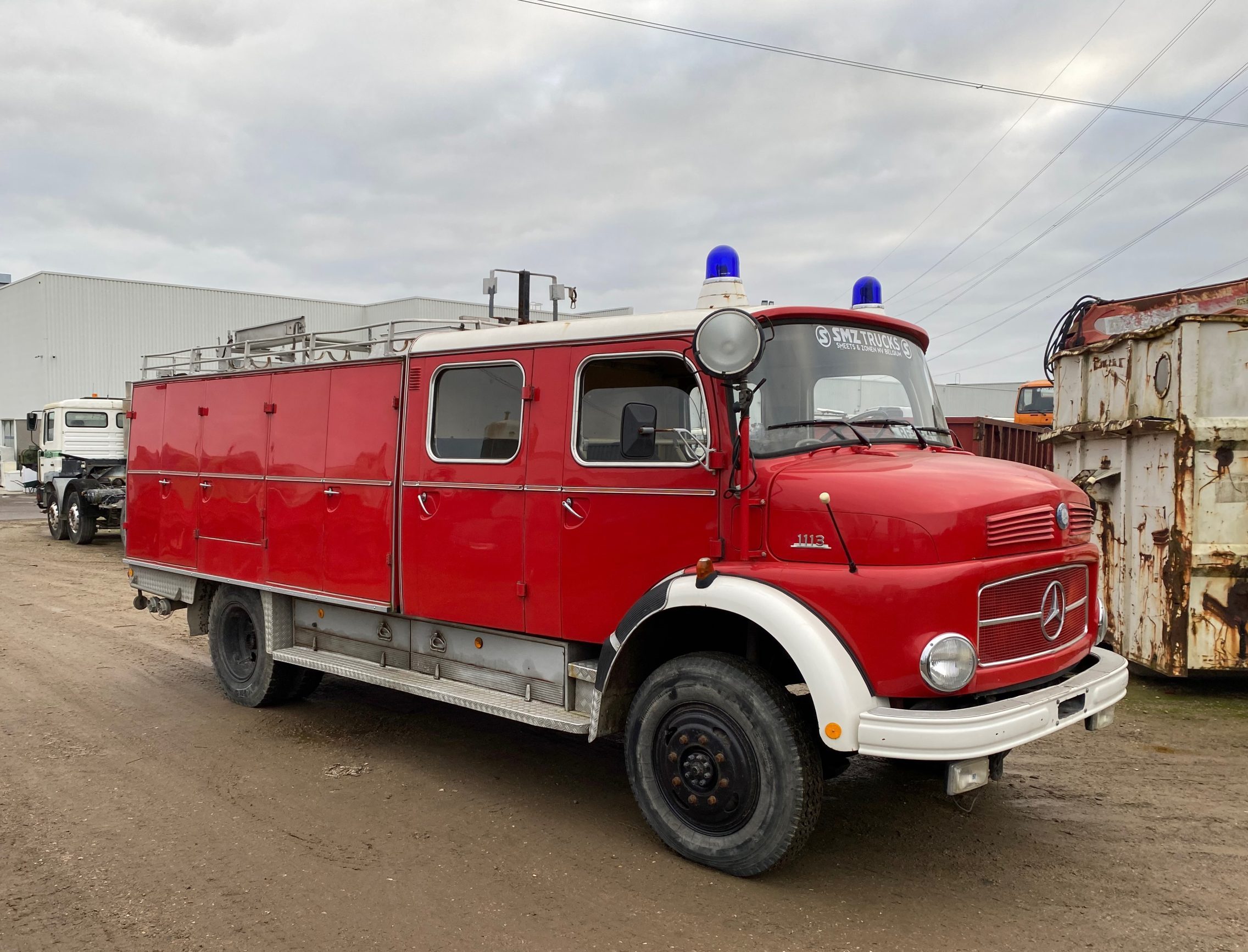 Once in Belgium, we had Smeets & Zonen (the company selling big trucks) take off the firefighting equipment and the original box. It’s a really weird feeling to part with a large chunk of cash for a truck, then tear the thing into pieces using an angle grinder – but since we want to build a custom box, it was inevitable. Off went the old stuff, the firefighting gear, and the water pump. 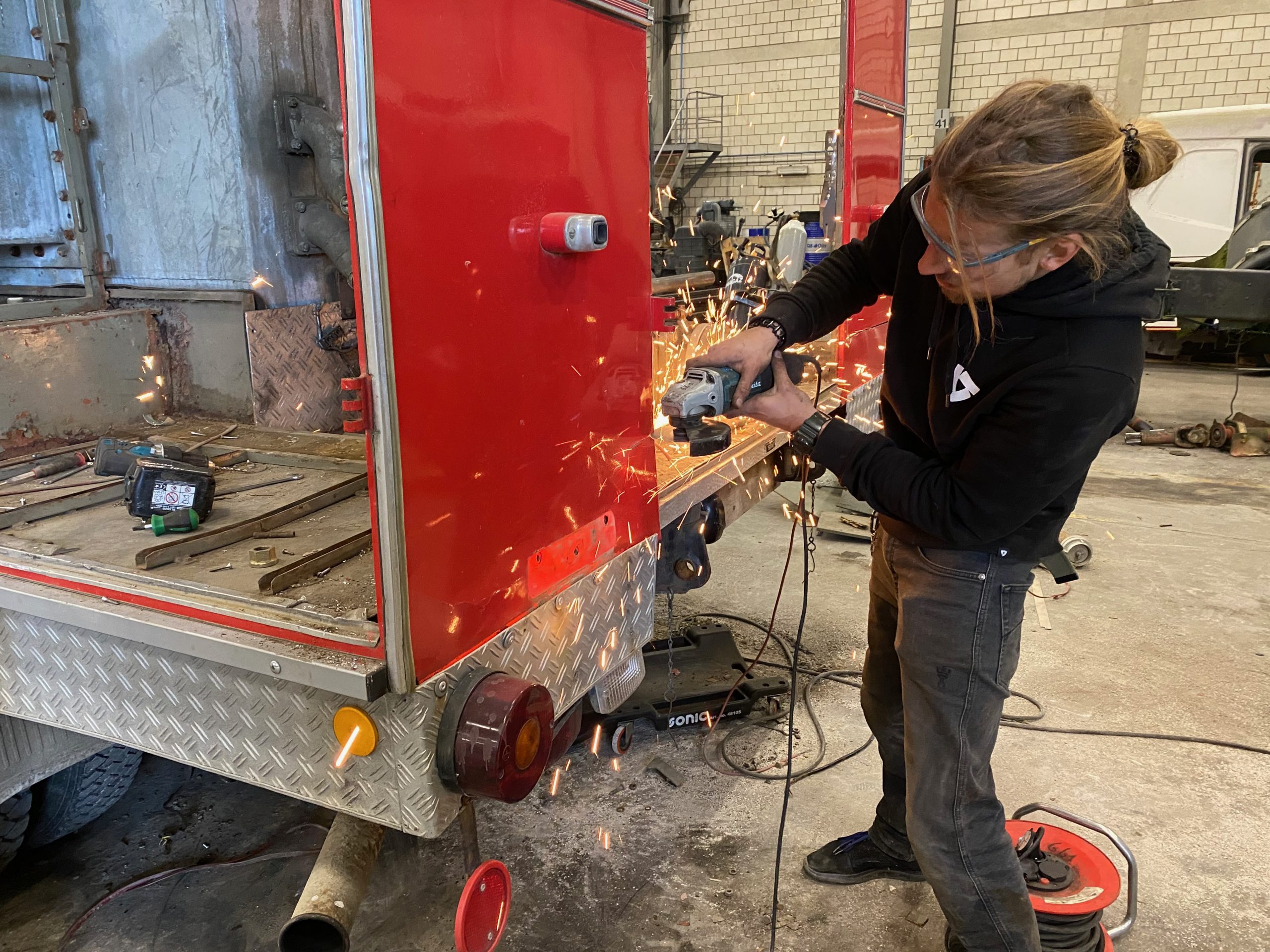 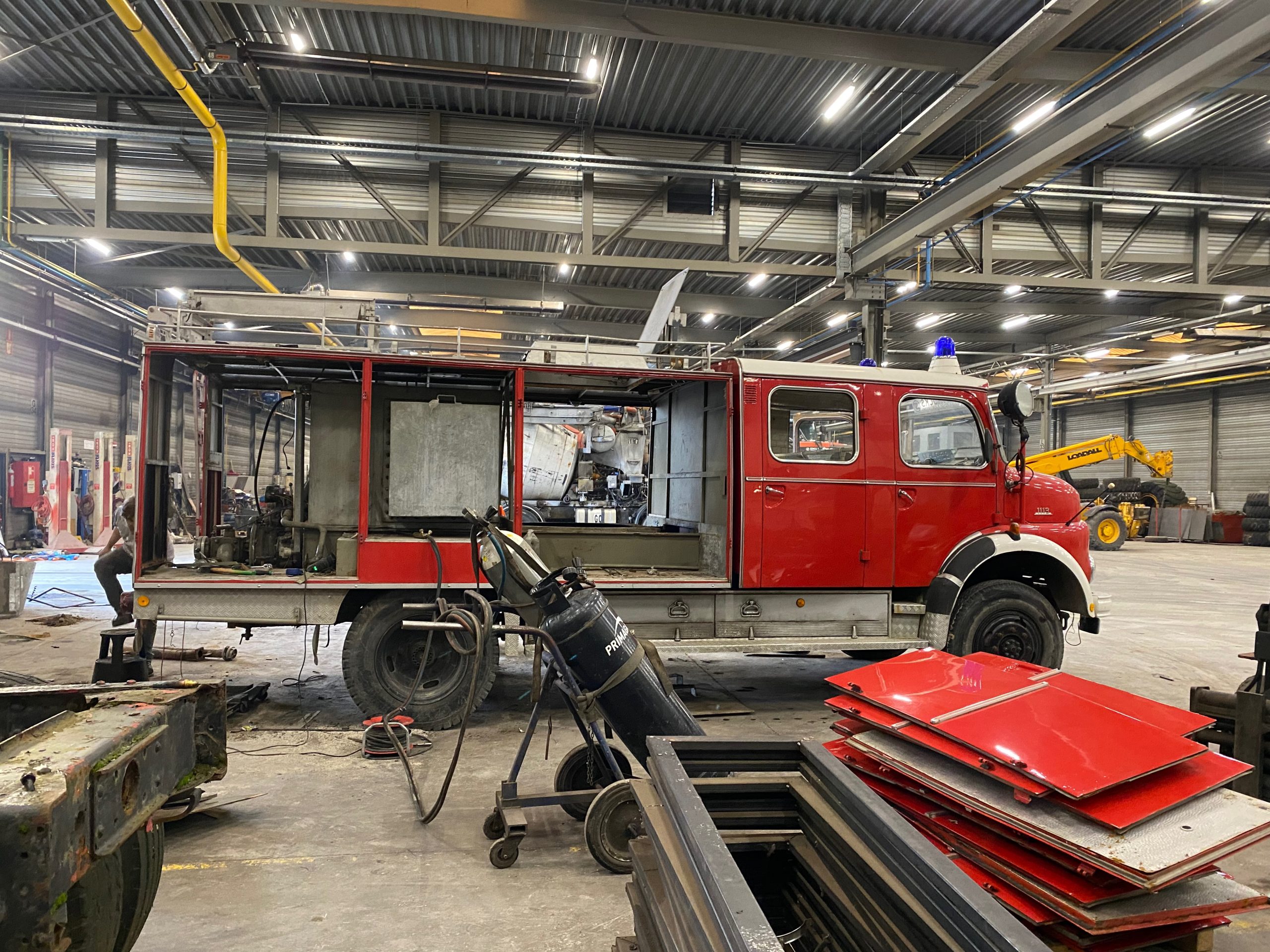 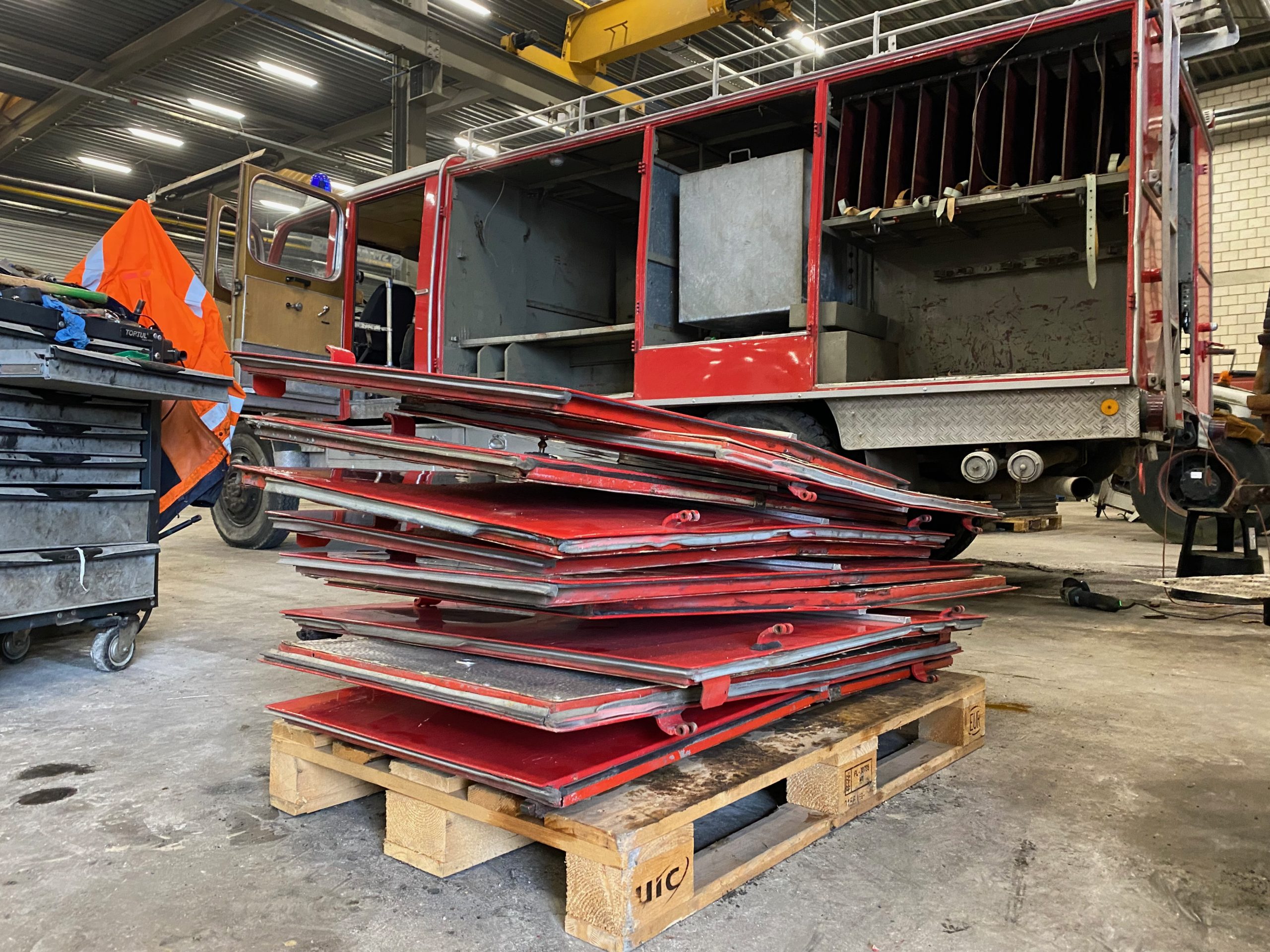 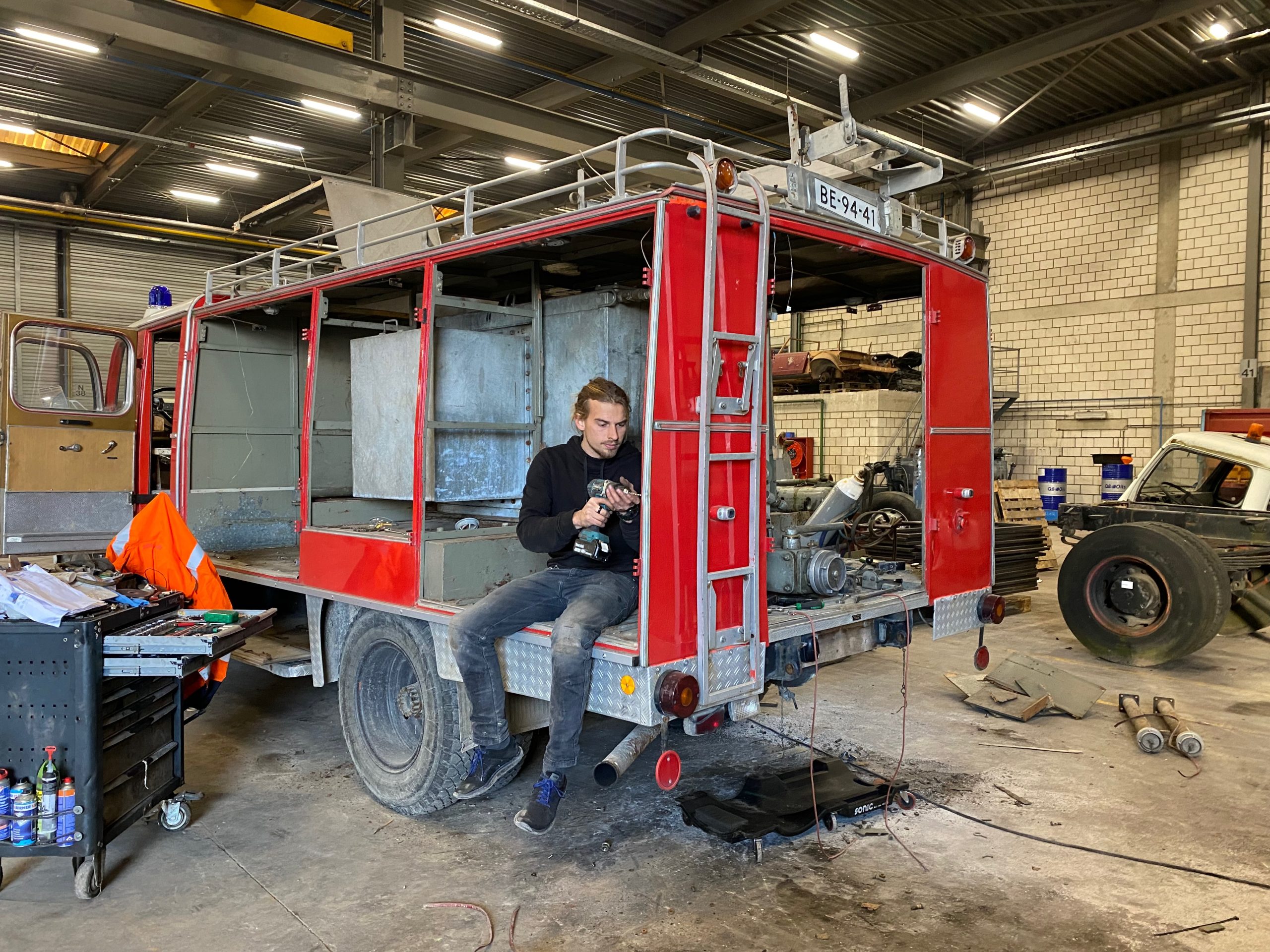 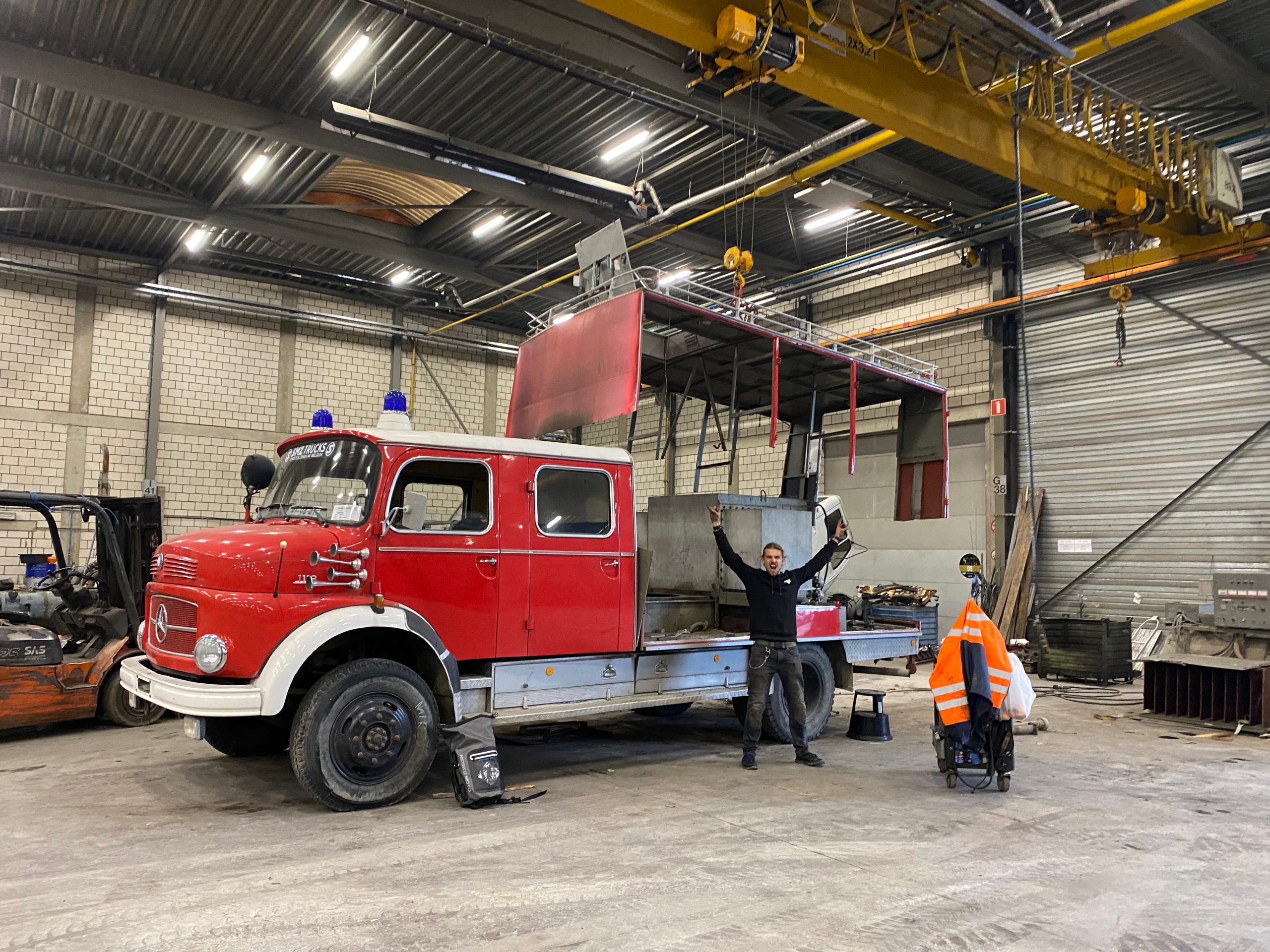 Next up, Lennart’s friend Tim drove the truck down to the Netherlands – Lennart is still working on getting his license – but we had to be somewhat clandestine about the siren claxons, as it’s illegal to drive with the siren thingies on. We duct-taped them over and hoped for the best…and snuck stealthily right back into the Netherlands.

Safely back in Brabant, we parked it at Atelier Van Dongen, a miraculous place of steel, art, and truck parts. It belongs to Paul, a welder, a blacksmith, and an artist who has built multiple Dakar service trucks for the Dutch Dakar team. In other words, the truck is definitely in great hands, and Paul is thankfully going to help us weld and build the box. 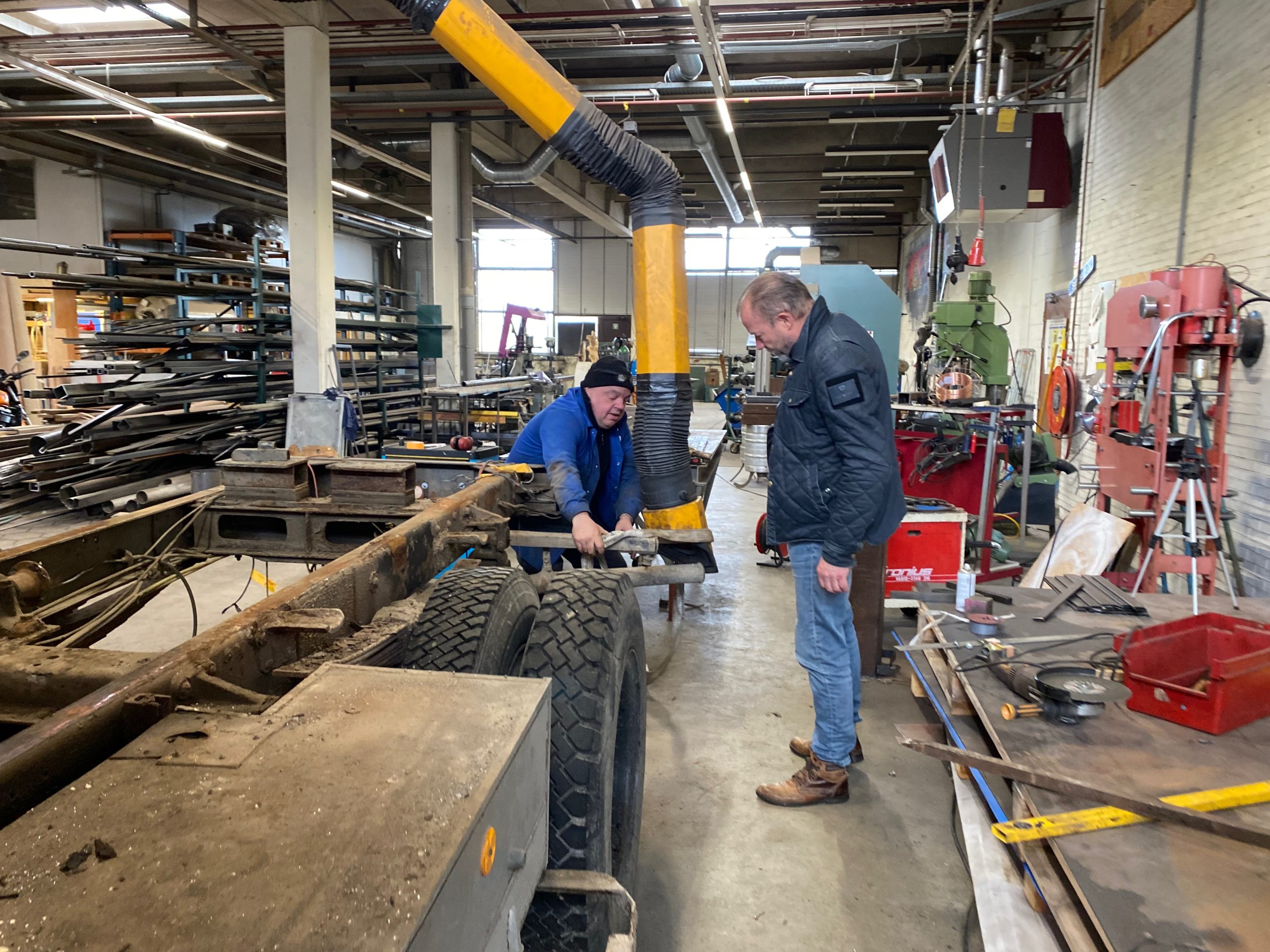 Although we showed up with a partly stripped truck and a collection of our own ideas on how to build it, Paul is insanely helpful giving us some solid advice, and we’re forever grateful we’ve got him on our side!

Treasures in the Truck

As we slowly dismantled the beast, we kept discovering all sorts of old but cool stuff hidden beneath the frame or the seats. Authentic door hinges and a Webasto diesel heater were an interesting find, and we’ll share the stuff with whoever may need it for their own rig. 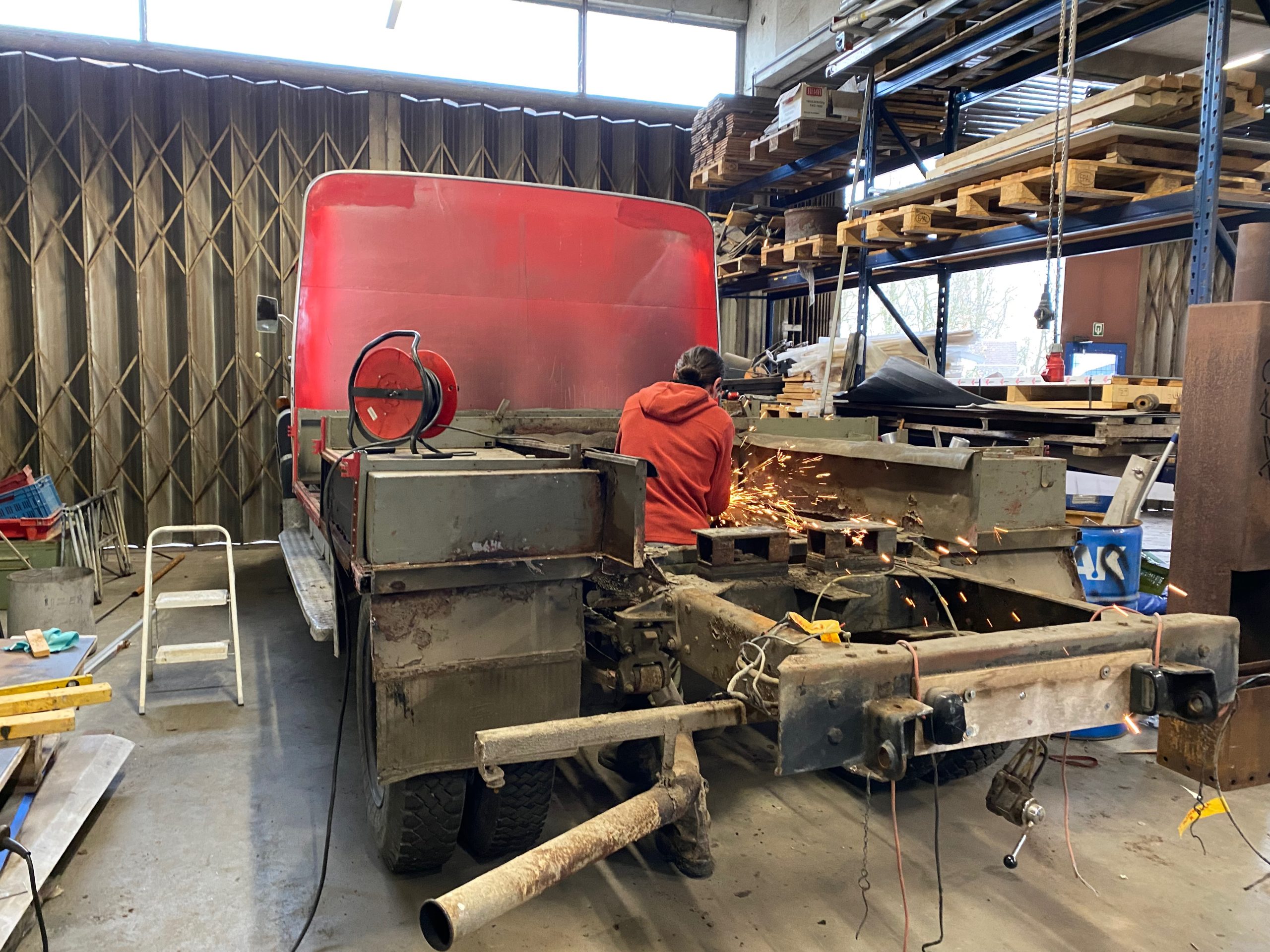 Now that we had a place and a rockstar welder on board, it was time to roll up the sleeves and take off the remaining water tank, the subframe, and the storage boxes. This is so we could take a close look at the chassis and inspect the brakes, the suspension, and everything else before we start building things on top.

The Beast’s innards look pretty good for its old age, but we’ll need to replace the suspension, repair a few minor things on the chassis, and replace the entire brake system. The good news is that the truck is old, which means it’s beautifully simple mechanically. There are almost no electronics, it’s built as solid as they come, and once we’re done with the bakes and the suspension, it’ll be time to start building the box.

The plan is to construct it from 40×40 steel beams with insulation in between, with enough space for the bikes on the back and a living room between the garage and the cabin. A little later on, we’re also going to take off the transmission box to replace the clutch (not my fault, I swear) and do some standard service on the engine.

As the overland truck build is taking shape, we’re slowly realizing just how much needs to be done before we can start working on the interior. We won’t have a lot of living space as we’re hauling two dual sport bikes inside; we’re keeping the double cabin, part of which we’ll transform into an office – reception area – party zone – navigation headquarters. 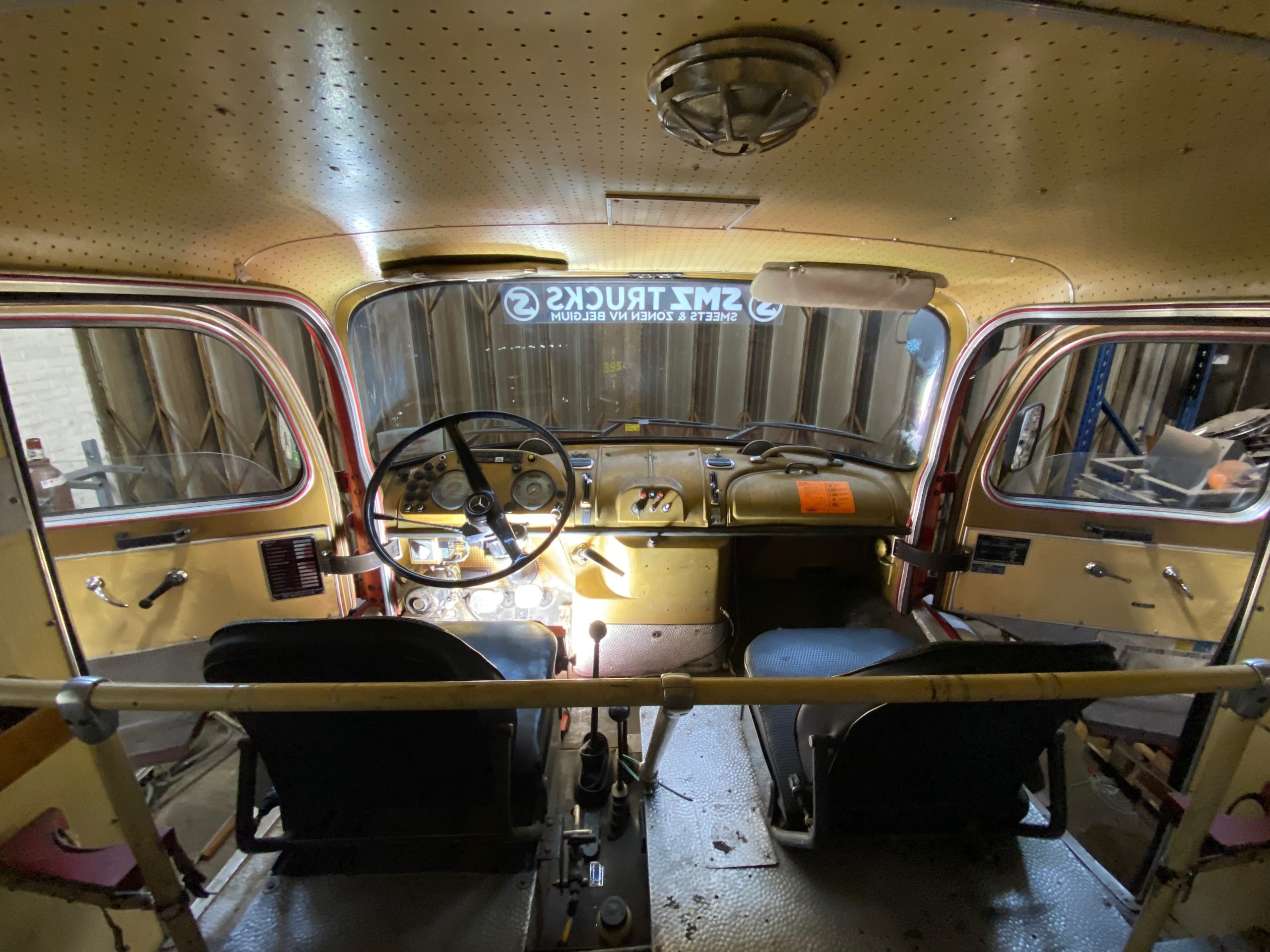 We’re hoping to stick to a minimalist design with light colors inside, and I’m already rubbing my paws together envisioning a coffee bean grinder and a minibar inside – plus all the nights we’ll spend looking up at starry skies and sleeping on the roof. It’s not to say that everything’s rainbows and roses: to be able to afford the Mastodon project, we’re currently residing in a borrowed campervan, Wim Hoffing our way through cold showers, dumpster diving, and working our butts off to make the dream a reality. The vision is beautiful, but the road to get there is bumpy (and rainy as hell. Thanks, Dutch winter); we’re doing our best to keep zen and building on, battling the blues of not being on the bikes, and plotting and scheming our next escape. 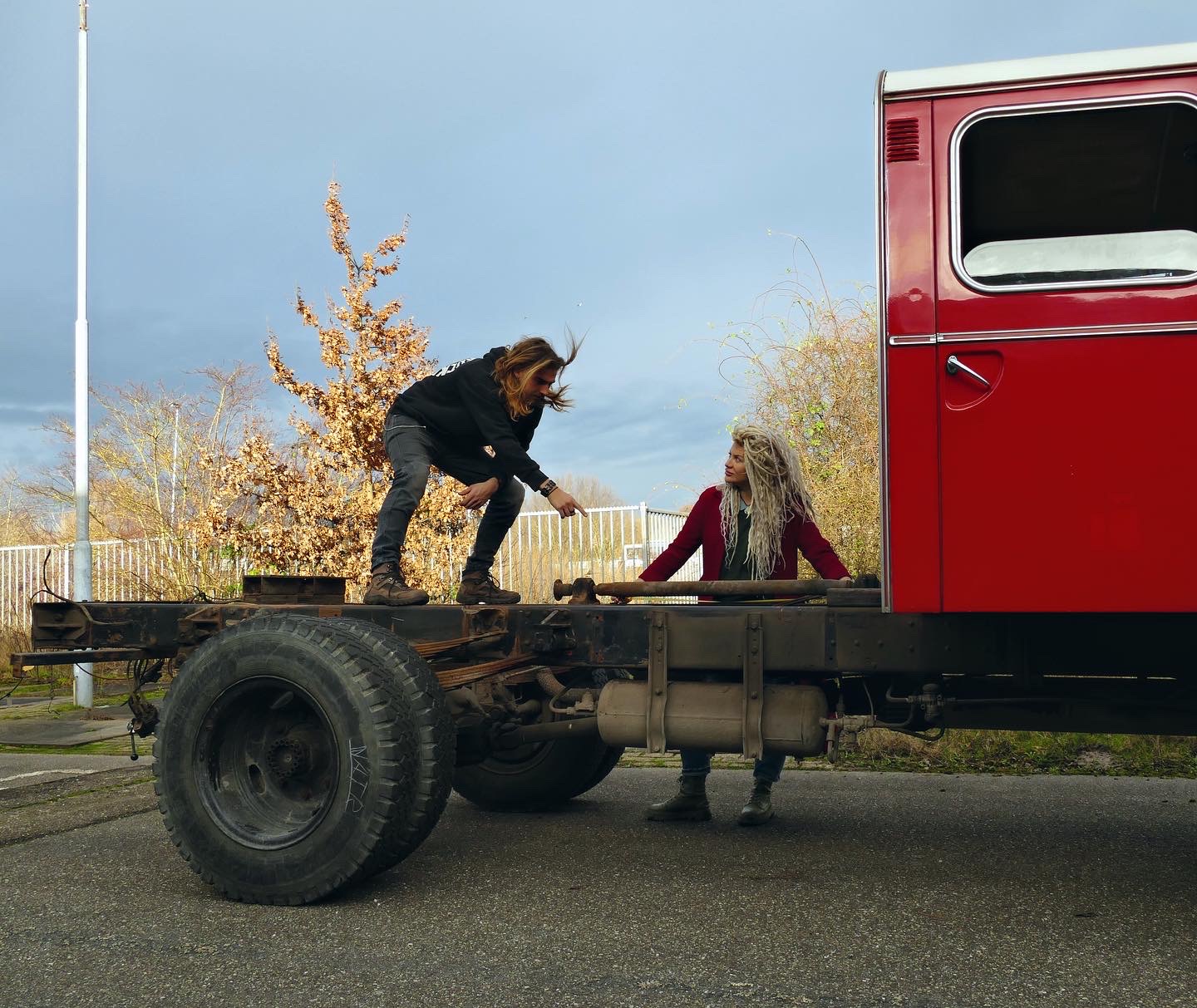 We’ll post the progress of the overland truck build as we go along – and in the meantime, help us figure out the name for the Mastodon! If you’re building your own overland rig, do share the good stuff – we’re super curious to see what you’re up to, and we’re all ears for good advice.

PrevPreviousHow to Get Sponsors for a Motorcycle Trip
NextWhat’s the Best Women’s Adventure Motorcycle Gear?Next